An app China expects athletes and coaches to use at the Olympic Winter Games is flawed and LG has four new monitors to consider for your workstation.

On Tuesday, internet researcher Jeffrey Knockel published a detailed analysis about a smartphone app that the Chinese government says needs to be used by all who are in the country for the Olympic Winter Games.

Knockel, an associate at the Citizen Lab in Toronto, wrote that his findings about the MY2022 app are, “while concerning, not surprising” given other research into Chinese software.

According to his analysis, the MY2022 software has encryption that can be “trivially sidestepped” so passport details, medical information, and the like are vulnerable.

And while the app is transparent about the information that it collects, there’s no clarity on where that information goes.

Citizen Lab informed the Beijing Organising Committee in early December about these issues and others, and while there was an update to MY2022 released earlier this week, “the issues we reported had not been resolved”.

Canadian officials are recommending that coaches and athletes leave their smartphones at home to prevent any cyberspying or cybercrime.

LG has four new monitors to make your desk better

LG is not only the maker of fine OLED televisions, the company also makes fine computer monitors, too. Here are four announced during CES that you might consider if you’re needing a new screen.

LG’s UltraFine line of monitors are intended for the creative types. They have top-notch colour accuracy and brightness, and this 32-inch model has HDR and uses LG’s new Nano IPS technology, which improves contrast and increases the range of colours that can be displayed.

This monitor gives you the equivalent of two 21.5-inch screens in one monitor, a good option if you’ve got limited desktop space. The experience is like having two monitors stacked on top of each other. The DualUp also has Nano IPS tech and HDR.

These two UltraFine monitors use LG’s OLED tech, as opposed to IPS, so they deliver 4K images with the fidelity and contrast you expect from an OLED screen. These are pricey monitors meant for video professionals who are working in dark environments in which these screens perform best. They do not have sufficient refresh rate for gaming, however.

This week on The Shift, Shane Hewitt and I talked about my favourite video games of 2021, the Wordle phenomenon, recent news in the game streaming space, BMW’s concept car that can change colour, and Apple’s new Everyone Can Code Early Learners resource for teachers.

My list of the games I most enjoyed last year, the Wordle phenomenon, Nvidia’s GeForce Now and Samsung’s Gaming Hub.

There’s not much point in me doing a best games list, because I didn’t play all the games last year. But of the about 30 I did play, here’s what I enjoyed the most, in no particular order.

Word puzzle phenomenon Wordle proves that everyone is a gamer

If you’re not playing Wordle you’re most certainly seeing it pop up in your social networks. The 5-column grid with grey, yellow, and green squares making up patterns in your feed stands out.

Here’s my first playthrough, from January 4. 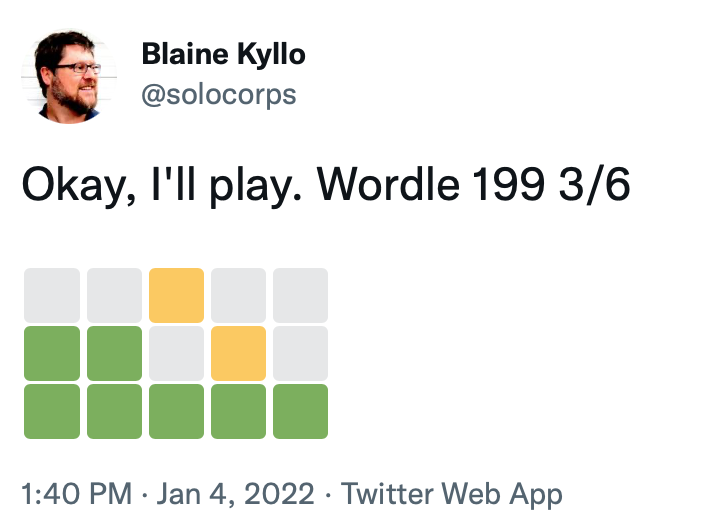 If you’ve played Mastermind, the board game, you’ll recognize these mechanics.

There’s only one puzzle a day, it’s free to play through a browser, and it’s got people of all types playing and sharing the graphic of their results, which allows us to show off without spoiling the solution for everyone else.

According to Merriam-Webster’s Official Scrabble Player’s Dictionary, there are 8,996 five letter words in the English language. That’s more than 24 years worth of puzzles.

It was a slow week in Vegas, but gaming always makes noise.

Nvidia is more than just a computer component manufacturer. While the company is known for its video cards and experiments with photo realistic renders, it’s also got some skin in the game streaming business with GeForce Now.

Nvidia also revealed a partnership with Samsung to have GeForce Now built into the Korean company’s televisions.

Having GeForce Now onboard its displays fits right in with Samsung’s push for the gaming dollar.

The company’s own Samsung Gaming Hub is being built into Samsung’s televisions and monitors. It’s a discovery service, so in addition to GeForce Now it will also include Stadia, Google’s streaming service, as well as integrating the YouTube Gaming channel.

I expect to see other streaming services – Xbox Game Pass and Playstation Now? – to be added soon.

BMW’s concept electric vehicle also makes use of electric ink and Apple’s got more resources to help teachers who want to add coding to their curriculum.

Car manufacturers never skip an opportunity to show off what they’re doing, and CES is no exception. There was plenty of electric vehicle news this year, but what caught my eye was a cosmetic feature in the BMW iX Flow: E Ink.

The four door SUV, which is a full electric, is wrapped in electrophoretic technology that can change colour whenever you want.

Stella Clarke is the project lead for BMW’s new iX Flow featuring E Ink, and in the video below, she explains that one thing this enables it the ability to show messages on the body of the car. It could let you know it needed to be charged, for example, or could flash in the parking lot to let you know where it is.

The E Ink technology is similar to that used in digital readers, and while it’s currently limited to black, grey, white, and patterns, the ambition is that you’d ultimately be able to seem like you’re driving a new car every day.

One way or another, kids across Canada are back to school this week, which means additional strain on teachers to make accommodates for omicron, public health measures, and government decisions.

Apple, which has a long tradition of supporting education, has a few resources to support teachers involved with remote learning.

There’s also the Everyone Can Create program, which provides tutorials for educators on different ways to engage students in expressing themselves through visuals and music using iPads.

Those resources are part of Apple’s broader Teacher Learning Center, which includes a calendar of activities including gatherings of teachers from around the world for Twitter chats and teacher learning opportunities.

One of the latest resources to be released is a new activity guide, Everyone Can Code Early Learners, which is a free PDF download. Intended for anyone helping children understand and learn coding, whether teachers or parents, the booklet includes three lesson plans that begin to develop the way of thinking that is required for coding.

Coding is, essentially, procedure and routine, which are things we all do everyday. With the support of these resources, teachers can use simple examples like brushing teeth or baking cookies as a way to introduce computational thinking.

Later on, kids can shift into other activities that build towards them working with Swift, the free and open-source software that is being used to program all kinds of apps.

Older and more sophisticated students can start thinking about how their app ideas can be inclusive and accessible.

This week on The Shift, Shane Hewitt and I talked about the most anticipated games coming this year, Sony’s Playstation VR2 system and the game, Horizon Call of the Mountain, and some numbers on how much people like to watch Minecraft on YouTube.

We also discussed a couple of new products Samsung announced at its CES 2022 keynote, the Freestyle video projector and the Odyssey Ark monitor. And we bid goodbye to the Blackberry OS stragglers out there.

The Mind Control Division is the intelligence arm of Blaine Kyllo's Solo Corps Creative Incorporated. This department conducts investigations and experiments into media and technology culture.

Solo Corps out there